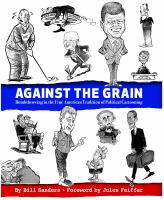 Against the grain : bombthrowing in the fine American tradition of political cartooning /

Editorial cartoonists are an endangered species, and even in their heyday they were rare birds -- at the top ranks of print journalism, only a few hundred such jobs existed worldwide in the 20th century. Yet those who wielded the drawing pen had enormous influence and popularity as they caricatured...