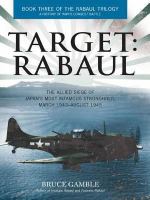 As the final book in Bruce Gamble's esteemed trilogy on the War in the Pacific, Target: Rabaul picks up where Fortress Rabaul, the second installment, leaves off and sets the stage for the major Allied aerial engagements of 1943 which would result in the defeat of Japan. March 1943, Washington,...