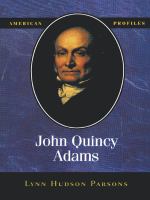 As son of the second president of the United States, father to the minister to the Court of St. James, and grandfather to author Henry Adams, John Quincy Adams was part of an American dynasty. In his own career as secretary of state, President, senator, and congressman, Adams was an actor in some of...