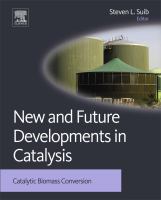 New and Future Developments in Catalysis is a package of books that compile the latest ideas concerning alternate and renewable energy sources and the role that catalysis plays in converting new renewable feedstock into biofuels and biochemicals. Both homogeneous and heterogeneous catalysts and cata...