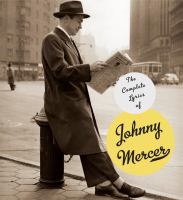 The complete lyrics of Johnny Mercer /

"Johnny Mercer's early songs became staples of the big band era and were regularly featured in the musicals of early Hollywood. With his collaborators, who included Richard A. Whiting, Harry Warren, Hoagy Carmichael, Jerome Kern, and Harold Arlen, he wrote the lyrics to some of the most fa...