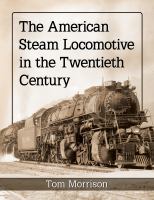 The American steam locomotive in the twentieth century /

"Between 1900 and 1950, Americans built the most powerful steam locomotives--enormous engines that powered a industry of colossal scale and intensity. They were deceptively simple machines yet even as the technology was being perfected it was becoming obscure. Despite immense and sustained effo...