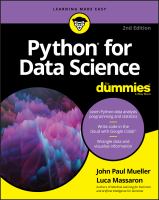 Python for data science for dummies /

The fast and easy way to learn Python programming and statisticsPython is a general-purpose programming language created in the late 1980s & mdash;and named after Monty Python & mdash;that's used by thousands of people to do things from testing microchips at Intel, to powering Instagram...