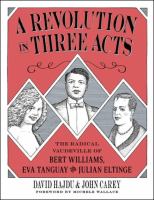 A revolution in three acts : the radical vaudeville of Bert Williams, Eva Tanguay, and Julian Eltinge /

"An African American who performed in blackface to challenge racial stereotypes; a woman whose song, "I Don't Care," became emblematic of the modern "New Woman"; and a female impersonator whose act was created to uphold the traditional values of American femininity. The...