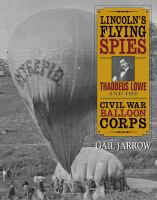 Describes the contributions made to the Union's efforts in the Civil War by Thaddeus Lowe and a corps of hot air balloonists who helped spy on the Confederate army, despite becoming targets in the war themselves.