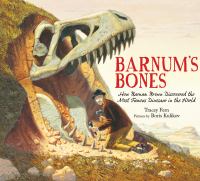 Barnum's bones : how Barnum Brown discovered the most famous dinosaur in the world / Tracey Fern ; pictures by Boris Kulikov.

Documents the work of an early twentieth-century paleontologist, named after the famous circus icon by his ambitious parents, who grew up to work for the American Museum of Natural History and discovered the first documented skeletons of the Tyrannosaurus Rex and other noteworthy species.