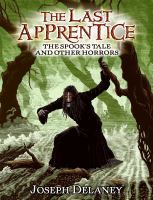 The Spook's tale and other horrors / by Joseph Delaney ; illustrations by Patrick Arrasmith.

As sixty-year-old John Gregory reflects on the past, he reveals how the world of ghosts, ghasts, witches, and boggarts was exposed to him and he later became the Spook, even though his first intention had been to join the priesthood.