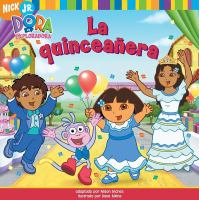 Dora and boots have to deliver a special crown and shoes to her cousin Daisy for her fifteenth birthday party--her fiesta de quinceaänera.