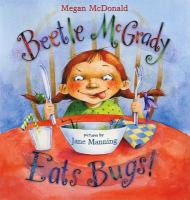 During Fun with Food Week in her school science class, second-grader Beetle McGrady tries to work up the courage to eat an ant.