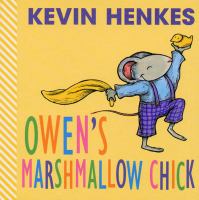 Owen is joyous when he receives a marshmallow chick as part of an Easter basket. Decked out in his purple plaid Easter finery, this boy mouse spends a giddy day playing with his sugary new pal. And does he succumb to tasty temptation? How dare you even think such a thing!