Hans Wilhelm (born September 21, 1945) is a German-American writer, children's book author and illustrator, and artist. Hans Wilhelm has written and/or illustrated over 200 books – mostly for children. They have been translated in more than thirty languages and have won numerous international awards and prizes. Many of them have been made into animated television series. Presently there are over forty two million books by Hans Wilhelm in print. Some of his best-known books include "I'll Always Love You", "Bunny Trouble" series, "Tyrone The Horrible" series, "Waldo" series, and the "Noodles" books. Wilhelm was born in Bremen, (Germany) where he grew up. Following his studies of art and business, he moved for 12 years to South Africa where he worked, painted, and was an acting member of a satirical theater group. His writing career began when he embarked on a two-year trip around the world where he lived in Bali, Spain, England and many other places.

He's also host to the "Life Explained" video series, which aims to visually explain a number of spiritual phenomena from his personal point of view. Provided by Wikipedia 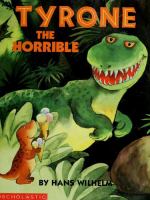