George Washington (February 22, 17321 (it had been March 25). These changes resulted in dates being moved forward 11 days and an advance of one year for those between January1 and March 25. For a further explanation, see Old Style and New Style dates.}}, 1799) was an American political leader, military general, statesman, and Founding Father who served as the first president of the United States from 1789 to 1797. Previously, he led Patriot forces to victory in the nation's War for Independence. He presided at the Constitutional Convention of 1787, which established the U.S. Constitution and a federal government. Washington has been called the "Father of His Country" for his manifold leadership in the formative days of the new nation.

Washington's first public office was serving as official Surveyor of Culpeper County, Virginia, from 1749 to 1750. Subsequently, he received his initial military training and a command with the Virginia Regiment during the French and Indian War. He was later elected to the Virginia House of Burgesses and was named a delegate to the Continental Congress, where he was appointed Commanding General of the Continental Army. He commanded American forces, allied with France, in the defeat and surrender of the British during the Siege of Yorktown. He resigned his commission after the Treaty of Paris in 1783.

Washington played a key role in adopting and ratifying the Constitution and was then twice elected president by the Electoral College. He implemented a strong, well-financed national government while remaining impartial in a fierce rivalry between cabinet members Thomas Jefferson and Alexander Hamilton. During the French Revolution, he proclaimed a policy of neutrality while sanctioning the Jay Treaty. He set enduring precedents for the office of president, including the title "Mr. President", and his Farewell Address is widely regarded as a pre-eminent statement on republicanism.

Washington owned slaves, and, to preserve national unity, he supported measures passed by Congress to protect slavery. He later became troubled with the institution of slavery and freed his slaves in a 1799 will. He endeavored to assimilate Native Americans into the Anglo-American culture but combated indigenous resistance during instances of violent conflict. He was a member of the Anglican Church and the Freemasons, and he urged broad religious freedom in his roles as general and president. Upon his death, he was eulogized as "first in war, first in peace, and first in the hearts of his countrymen". He has been memorialized by monuments, art, geographical locations, including the national capital, stamps, and currency, and many scholars and polls rank him among the greatest U.S. presidents. Provided by Wikipedia

The journal of Major George Washington sent by the Hon. Robert Dinwiddie to the commandant of the French forces in Ohio : with a map.
by Washington, George, 1732-1799.
Published 1865
Call Number: Loading...
Located: Loading...
CONNECT

Correspondence of the American Revolution being letters of eminent men to George Washington, from the time of his taking command of the army to the end of his presidency. Vol. III...
by Washington, George, 1732-1799.
Published 1853
Call Number: Loading...
Located: Loading...
World Book Advanced

A circular letter from George Washington commander in chief of the armies of the United States of America, to His Excellency William Greene, Esq., governor of the state of Rhode Is...
by Washington, George, 1732-1799.
Published 1783
Call Number: Loading...
Located: Loading...
Microfilm Book Loading... 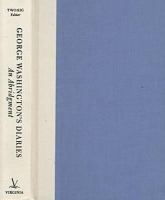 Letters and recollections of George Washington; being letters to Tobias Lear and others between 1790 and 1799, showing the first American in the management of his estate and domest...
by Washington, George, 1732-1799.
Published 1906
Call Number: Loading...
Located: Loading...
Book Loading...