William Traylor (April 1,  – October 23, 1949) was an African-American self-taught artist from Lowndes County, Alabama. Born into slavery, Traylor spent the majority of his life after emancipation as a sharecropper. It was only after 1939, following his move to Montgomery, Alabama, that Traylor began to draw. At the age of 85, he took up a pencil and a scrap of cardboard to document his recollections and observations. From 1939 to 1942, while working on the sidewalks of Montgomery, he produced nearly 1,500 pieces of art.

While Traylor received his first public exhibition in 1940, it was not until 30 years after his death that his work finally began to receive broader attention, in the late 1970s. Recent acceptance of Traylor as a significant figure of American folk and modern art has been founded on the efforts of Charles Shannon, as well as the evolving tastes of the art world. Shannon, who first encountered Traylor's work in 1940, brought Traylor to the attention of the larger art world. Since then, public and scholarly perception of Traylor's life and work has been in constant evolution. Traylor now holds a central position in the fields of "self-taught" and modern art. Provided by Wikipedia 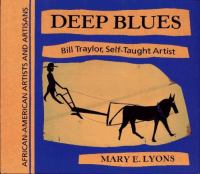