John Kennedy Toole (; December 17, 1937 – March 26, 1969) was an American novelist from New Orleans, Louisiana, whose posthumously published novel ''A Confederacy of Dunces'' won the Pulitzer Prize for Fiction. He also wrote ''The Neon Bible''. Although several people in the literary world felt his writing skills were praiseworthy, Toole's novels were rejected during his lifetime. After suffering from paranoia and depression due in part to these failures, he died by suicide at the age of 31.

Toole was born to a middle-class family in New Orleans. From a young age, his mother, Thelma, taught him an appreciation of culture. She was thoroughly involved in his affairs for most of his life, and at times they had a difficult relationship. With his mother's encouragement, Toole became a stage performer at the age of 10 doing comic impressions and acting. At 16 he wrote his first novel, ''The Neon Bible'', which he later dismissed as "adolescent".

Toole received an academic scholarship to Tulane University in New Orleans. After graduating from Tulane, he studied English at Columbia University in New York while teaching simultaneously at Hunter College. He also taught at various Louisiana colleges, and during his early career as an academic he was valued on the faculty party circuit for his wit and gift for mimicry. His studies were interrupted when he was drafted into the army, where he taught English to Spanish-speaking recruits in San Juan, Puerto Rico. After receiving a promotion, he used his private office to begin writing ''A Confederacy of Dunces'', which he finished at his parents' home after his discharge.

''Dunces'' is a picaresque novel featuring the misadventures of protagonist Ignatius J. Reilly, a lazy, obese, misanthropic, self-styled scholar who lives at home with his mother. It is hailed for its accurate depictions of New Orleans dialects. Toole based Reilly in part on his college professor friend Bob Byrne. Byrne's slovenly, eccentric behavior was anything but professorial, and Reilly mirrored him in these respects. The character was also based on Toole himself, and several personal experiences served as inspiration for passages in the novel. While at Tulane, Toole filled in for a friend at a job as a hot tamale cart vendor, and worked at a family owned and operated clothing factory. Both of these experiences were later adopted into his fiction.

Toole submitted ''Dunces'' to publisher Simon & Schuster, where it reached editor Robert Gottlieb. Gottlieb considered Toole talented but felt his comic novel was essentially pointless. Despite several revisions, Gottlieb remained unsatisfied, and after the book was rejected by another literary figure, Hodding Carter Jr., Toole shelved the novel. Suffering from depression and feelings of persecution, Toole left home on a journey around the country. He stopped in Biloxi, Mississippi, to end his life by running a garden hose in from the exhaust of his car to the cabin. Some years later, his mother brought the manuscript of ''Dunces'' to the attention of novelist Walker Percy, who ushered the book into print. In 1981, Toole was posthumously awarded the Pulitzer Prize for Fiction. Provided by Wikipedia 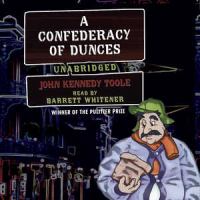