Edward Taylor (1642 – June 29, 1729) was of English origin and a colonial American poet, pastor and physician. His work remained unpublished for some 200 years but since then has established him as one of the foremost writers of his time. His poetry has been characterized as "American Baroque" as well as Metaphysical. Provided by Wikipedia
1 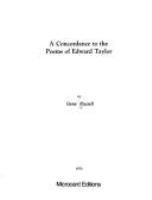