'Linda Solomon (born May 10, 1937, Boston, Massachusetts) is an American music critic and editor. Although she has written about various aspects of popular culture, her main focus has been on folk music, blues, R&B, jazz and country music. Living at 95 Christopher Street in Greenwich Village during the early 1960s, she became a columnist for ''The Village Voice'', capturing Village night life in club reviews for the weekly "Riffs" column.

[http://jophan.org/mimosa/m12/white.htm "The Bet"] is a memoir by Ted White describing Harlan Ellison, Linda Solomon and others involved in a curious incident at 95 Christopher in 1960. White wrote: :That summer Harlan found his own apartment -- three doors up the street, in a building with an elevator. And he met a woman, Linda Solomon, who also lived in the same building. Linda would go on to a career of her own in writing and editing, but that was mostly ahead of her in 1960. Linda had a small but well-selected record collection, containing a goodly amount of jazz.

A dispute over the bandleader on one record in Solomon's collection prompted Ellison to bet his entire record collection against a single album in White's collection.

Ellison also mentioned her briefly in his memoir "Memos From Purgatory." Provided by Wikipedia 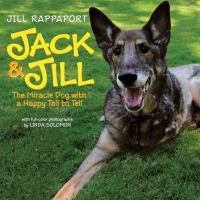 Jack & Jill : the miracle dog with a happy tail to tell / by Jill Rappaport ; with full-color photographs by Linda Solomon.
by Rappaport, Jill.
Published 2009
Other Authors: '; “...Solomon, Linda...”