The Sierra Club is an environmental organization with chapters in all 50 United States, Washington D.C., and Puerto Rico. The club was founded on May 28, 1892, in San Francisco, California, by the Scottish-American preservationist John Muir, who became the first president, as well as the longest serving president at approximately 20 years in this leadership position. The Sierra Club operates only in the United States. Sierra Club Canada is separated from the Sierra Club.

Traditionally associated with the progressive movement, the club was one of the first large-scale environmental preservation organizations in the world, and currently engages in lobbying politicians to promote environmentalist policies. Recent focuses of the club include promoting sustainable energy, mitigating global warming, and opposing the use of coal. The club is known for its political endorsements, which are often sought after by candidates in local elections; it generally supports liberal and progressive candidates in elections.

The Sierra Club is organized on both a national and state level with chapters named for the 50 states and two U.S. territories (Puerto Rico and Washington D.C.) California is the lone state to have numerous chapters named for California counties. The club chapters allow for regional groups and committees, some of which have many thousands of members. These chapters further allow for special interest sections (ex. Camera, Outings), committees (conservation and political), and task forces on a single issue with some kind of geography involved. While much activity is coordinated at a local level, the club is a unified organization; decisions made at the national level take precedence, including the removal and creation of Chapters, as well as recruiting and removing members.

In addition to political advocacy, the Sierra Club organizes outdoor recreation activities, and has historically been a notable organization for mountaineering and rock climbing in the United States. Members of the Sierra Club pioneered the Yosemite Decimal System of climbing, and were responsible for a substantial amount of the early development of climbing. Much of this activity occurred in the group's namesake Sierra Nevada. The Sierra Club does not set standards for or regulate alpinism, but it organizes wilderness courses, hikes, and occasional alpine expeditions for members. In California, the club, through its outdoor recreation groups, is usually considered the state's analogue to other state mountaineering clubs such as Mazamas, The Mountaineers, or the Colorado Mountain Club. Provided by Wikipedia

The Sierra Club guides to the national parks of the Pacific Northwest and Alaska / [text by Robert Belous ... et al.].
Published 1996
“...Sierra Club....” 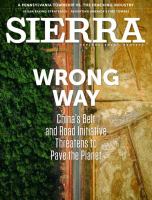 Not man apart; lines from Robinson Jeffers. Photos. of the Big Sur coast, by Ansel Adams [and others]
Published 1965
“...Sierra Club....”

Navajo wildlands; "as long as the rivers shall run." Photos. by Philip Hyde. Text by Stephen C. Jett, with selections from Willa Cather [and others] Edited by Kenneth Brower. Forew...
by Jett, Stephen C., 1938-
Published 1967
“...Sierra Club....”

Kauai and the park country of Hawaii. Edited by Kenneth Brower. With a foreword by David Brower.
by Wenkam, Robert, 1920-
Published 1967
“...Sierra Club....”