Joanne Shenandoah (born 1958) is a singer, composer and acoustic guitarist based in the United States. She is a member of the Wolf Clan; the Oneida Nation is part of the ''Haudenosaunee'' (Iroquois Confederacy). Her music is a combination of traditional songs and melodies with a blend of instrumentation.

She has recorded more than 15 albums and won numerous awards, including an Honorary Doctorate of Music by Syracuse University in 2002. She received a Grammy Award for her part in the album ''Sacred Ground: A Tribute to Mother Earth'' (2005), which had tracks by numerous artists. Provided by Wikipedia 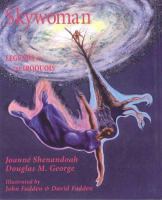