Marjorie Weinman Sharmat (November 12, 1928 – March 12, 2019) was an American children's writer. She wrote more than 130 books for children and teens and her books have been translated into several languages. They have won awards including Book of the Year by the Library of Congress or have become selections by the Literary Guild.

Perhaps Sharmat's most popular work features the child detective Nate the Great. He was inspired by and named after her father, who lived to see the first Nate book published. One story, ''Nate the Great Goes Undercover'', was adapted as a made-for-TV movie that won the Los Angeles International Children's Film Festival Award. Sharmat's husband Mitchell Sharmat expanded Nate's storyline by creating Olivia Sharp, his cousin and fellow detective. Husband and wife wrote four Olivia Sharp books published 1989 to 1991. During the 1990s, their son Craig Sharmat (then in his thirties) wrote three Nate books with his mother. In the late 2010s, their other son Andrew co-wrote the last two Nate books written while Marjorie Weinman Sharmat was alive. With Marjorie Weinman Sharmat's passing in 2019 Andrew has continued writing the series with Nate the Great and the Earth Day Robot (2021).

In the mid-1980s Sharmat wrote three books published in 1984 and 1985 under the pseudonym Wendy Andrews (below).

Sharmat also wrote the Sorority Sisters series, eight short novels published in 1986 and 1987 (not listed below). They are romantic fiction with a sense of humor. They are set in a California public high school (day school for ages 14 to 18, approximately). Provided by Wikipedia 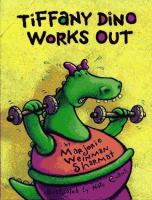 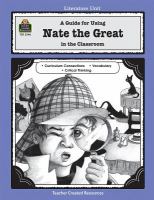 A guide for using Nate the great in the classroom : based on the novel written by Marjorie Weinman Sharmat /
by Bolte, Mary.
Published 1998
Other Authors: “...Sharmat, Marjorie Weinman....”