Clara Josephine Schumann (; née Wieck; 13 September 1819 – 20 May 1896) was a German pianist, composer, and piano teacher. Regarded as one of the most distinguished pianists of the Romantic era, she exerted her influence over a 61-year concert career, changing the format and repertoire of the piano recital from displays of virtuosity to programs of serious works. She also composed solo piano pieces, a piano concerto (her Op. 7), chamber music, choral pieces, and songs.

She grew up in Leipzig, where her father, Friedrich Wieck, was a pianist and teacher, and her mother, Mariane, was a pianist, singer, and piano teacher. She was a child prodigy, trained by her father. She began touring at age eleven, and was successful in Paris and Vienna, among other cities. She married the composer Robert Schumann, and the couple had eight children. Together, they encouraged Johannes Brahms and maintained a close relationship with him. She premiered many works by her husband and by Brahms in public.

After Robert Schumann's early death, she continued her concert tours in Europe for decades, frequently with the violinist Joseph Joachim and other chamber musicians. Beginning in 1878, she was an influential piano educator at Dr. Hoch's Konservatorium in Frankfurt, where she attracted international students. She edited the publication of her husband's work. Schumann died in Frankfurt, but was buried in Bonn beside her husband.

Several films have focused on Schumann's life, the earliest being ''Träumerei'' (''Dreaming'') of 1944. A 2008 film, ''Geliebte Clara'' (''Beloved Clara''), was directed by Helma Sanders-Brahms. An image of Clara Schumann from an 1835 lithograph by Andreas Staub was featured on the 100 Deutsche Mark banknote from 1989 to 2002. Interest in her compositions began to revive in the late 20th century, and her 2019 bicentenary prompted new books and exhibitions. Provided by Wikipedia 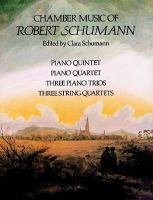