Eric Alfred Leslie Satie (, ; ; 17 May 18661 July 1925), who signed his name Erik Satie after 1884, was a French composer and pianist. He was the son of a French father and a British mother. He studied at the Paris Conservatoire but was an undistinguished student and obtained no diploma. In the 1880s he worked as a pianist in café-cabaret in Montmartre, Paris, and began composing works, mostly for solo piano, such as his ''Gymnopédies''. He also wrote music for a Rosicrucian sect to which he was briefly attached.

After a spell in which he composed little, Satie entered Paris's second music academy, the Schola Cantorum, as a mature student. His studies there were more successful than those at the Conservatoire. From about 1910 he became the focus of successive groups of young composers attracted by his unconventionality and originality. Among them were the group known as Les Six. A meeting with Jean Cocteau in 1915 led to the creation of the ballet ''Parade'' (1917) for Serge Diaghilev, with music by Satie, sets and costumes by Pablo Picasso and choreography by Léonide Massine.

Satie's example guided a new generation of French composers away from post-Wagnerian impressionism towards a sparer, terser style. Among those influenced by him during his lifetime were Maurice Ravel and Francis Poulenc, and he is seen as an influence on more recent, minimalist, composers such as John Cage and John Adams. His harmony is often characterised by unresolved chords, he sometimes dispensed with bar-lines, as in his ''Gnossiennes'', and his melodies are generally simple and often reflect his love of old church music. He gave some of his later works absurd titles, such as ''Veritables Preludes flasques (pour un chien)'' ("True Flabby Preludes (for a Dog)", 1912), ''Croquis et agaceries d'un gros bonhomme en bois'' ("Sketches and Exasperations of a Big Wooden Man", 1913) and ''Sonatine bureaucratique'' ("Bureaucratic Sonata", 1917). Most of his works are brief, and the majority are for solo piano. Exceptions include his "symphonic drama" ''Socrate'' (1919) and two late ballets ''Mercure'' and ''Relâche'' (1924).

Satie never married, and his home for most of his adult life was a single small room, first in Montmartre and from 1898 to his death, in Arcueil, a suburb of Paris. He adopted various images over the years, including a period in quasi-priestly dress, another in which he always wore identically-coloured velvet suits, and is known for his last persona, in neat bourgeois costume, with bowler hat, wing collar and umbrella. He was a lifelong heavy drinker, and died of cirrhosis of the liver at the age of 59. Provided by Wikipedia 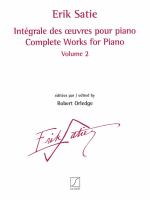 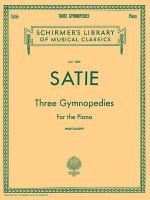