Matilda White Riley (April 19, 1911 – November 14, 2004) was an American gerontologist who began working at Rutgers University as a research specialist before becoming a professor from 1950 to 1973. Here she wrote a textbook and discovered her interest in aging. In 1973, Riley became the first woman full professor at Bowdoin College, where she worked until 1981. She spent much of her career as a sociologist specializing in aging at the National Institute on Aging, part of the National Institutes of Health. Additionally, Riley worked with the Russell Sage Foundation from 1974 to 1977 where she wrote works on the age-stratification paradigm and aging society perspective. Provided by Wikipedia
1 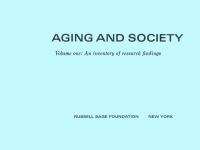