Tohby Riddle is an Australian artist and writer/illustrator of picture books and illustrated books that have been published in many countries, and translated into many languages, around the world. His work has been translated by Haruki Murakami and he has been nominated for the 2022 Hans Christian Andersen Medal.

Tohby Riddle's picture books include ''The Great Escape from City Zoo'', ''The Royal Guest'', ''Nobody Owns the Moon'', ''My Uncle's Donkey'' and ''Unforgotten''. Other books include ''The Greatest Gatsby: a visual book of grammar'', the Word Spy books written by Ursula Dubosarsky and illustrated by Tohby Riddle, the novel ''The Lucky Ones'', and two cartoon collections, ''What's the Big Idea?'' and ''Pink Freud''. The cartoon collections are selected from his work as the weekly cartoonist for ''Good Weekend'' magazine (''Sydney Morning Herald'' and Melbourne's ''Age''), a position he held for nearly ten years from 1997–2006.

In 2005 he became editor of The School Magazine, a literary magazine for children founded in 1916, in which his illustrations, non-fiction pieces and poems have also appeared regularly. In 2009 he won the Patricia Wrightson Prize in the New South Wales Premier's Literary Awards with Ursula Dubosarsky for their book ''The Word Spy''.

In 2018, Tohby Riddle's book ''My Uncle's Donkey'' was translated into a Japanese edition by one of the world's greatest living writers Haruki Murakami after Mr Murakami discovered the book in a Melbourne bookshop on a visit to Australia. This edition was published in December 2018 by Asunaro Shobo.

In December 2020 Tohby Riddle was nominated by Australia for the 2022 Hans Christian Andersen Award.

As an artist, Tohby Riddle's paintings have continued to gain a following since a sell-out show in 2019. A large solo exhibition is scheduled for December 2021 at the Blue Mountains Cultural Centre Art Gallery, in Katoomba, NSW, Australia. Provided by Wikipedia 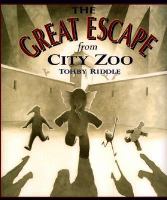