Chris Philo FAcSS (born 1960) is Professor of Geography at the Department of Geographical and Earth Sciences, the University of Glasgow.

Philo graduated from the Sidney Sussex College of Cambridge University and became a Research Fellow there. In 1989 he joined the Department of Geography at the University of Wales, Lampeter, holding that post for six years, until 1995. He then joined the University of Glasgow as a Professor, becoming head of the department in 2002. In 2006 Chris was replaced as Head of Department by Professor Trevor Hoey and was enlisted on the Geography and Environmental Studies RAE Sub-Panel.

His interests have been in the historical geographies of 'madness' and mental health and mental health care provision. Later, he has contributed to the emerging, and increasingly significant, sub-discipline of animal geographies, with eclectic writing on other topics. A devotee of the work of Michel Foucault, his research extended and localised Foucault's history of madness to England and Wales. Over a decade in the writing, his major work, based on an extensive PhD thesis, was published by a minor press in Wales as ''A Geographical History of Institutional Provision for the Insane from Medieval Times to the 1860s in England and Wales: The Space Reserved for Insanity''. Always a generous collaborator, he has co-edited numerous general anthologies of human geography. Provided by Wikipedia 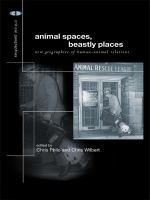