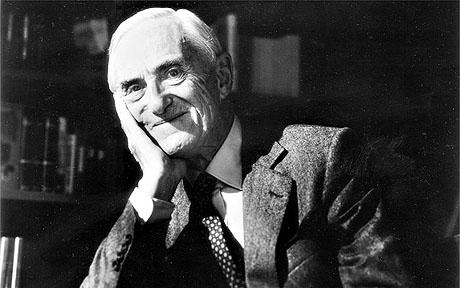 '''Patrick O'Brian, CBE (12 December 1914 – 2 January 2000), born Richard Patrick Russ''', was an English novelist and translator, best known for his Aubrey–Maturin series of sea novels set in the Royal Navy during the Napoleonic Wars, and centred on the friendship of the English naval captain Jack Aubrey and the Irish–Catalan physician Stephen Maturin. The 20-novel series, the first of which is ''Master and Commander'', is known for its well-researched and highly detailed portrayal of early 19th-century life, as well as its authentic and evocative language. A partially finished 21st novel in the series was published posthumously containing facing pages of handwriting and typescript.

O'Brian wrote a number of other novels and short stories, most of which were published before he achieved success with the Aubrey–Maturin series. He also translated works from French to English, and wrote two biographies.

His major success as a writer came late in life, when the Aubrey-Maturin series caught the eye of an American publisher. The series drew more readers and favourable reviews when the author was in his seventies. Near the end of his life, and in the same year that he lost his wife, British media revealed details of O'Brian's early life, first marriage, and post-war change of name, causing distress to the very private author and to many of his readers at that time. Provided by Wikipedia