Sonia Nieto is Professor Emerita of Language, Literacy and Culture at the School of Education, University of Massachusetts Amherst. With experience teaching students at all levels and from many socioeconomic and cultural backgrounds, Nieto is one of the leading authors and teachers in the field of multiculturalism. She has won several awards in her field, most notably the 1997 Multicultural Educator of the Year award from the National Association for Multicultural Education, the 2005 Educator of the Year Award from the National Council of Teachers of English, and honorary doctorates from Lesley University (1999), Bridgewater State College (2004), and DePaul University (2007).

Nieto was raised in Brooklyn, New York where she attended the public school systems until eventually attending St. Johns University where she received her B.S. in Elementary Education. Later, she studied abroad in Madrid, Spain, receiving her M.A. in Spanish and Hispanic Literature. In the following years she taught in Brooklyn and the Bronx until moving to Massachusetts and receiving her doctorate in curriculum studies with concentrations in multicultural and bilingual education, from the University of Massachusetts in 1979. In May 2017, Nieto delivered the commencement address for the Graduate School of Education at St. John's University in New York City, where she reflected on her life work and her undergraduate days at St. John's. Provided by Wikipedia 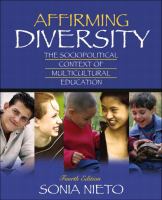