Ralph Winston Morris (born January 19, 1941 in Barnwell, South Carolina) is an American tubist. He served as professor of tuba and euphonium at Tennessee Tech University in Cookeville, Tennessee, for 55 years, and subsequent to his retirement after the 2021-2022 academic year, was named Professor Emeritus of Tuba and Euphonium. Morris is editor of ''The Tuba Source Book'' and the ''Euphonium Source Book''.

Morris earned his academic degree in music from East Carolina University in 1962. As the conductor of the Tennessee Tech Tuba Ensemble, he started promoting jazz tuba performance in an ensemble setting as early as 1967. Morris created the first tuba/euphonium ensemble at Tennessee Tech.

The Tennessee Tech Tuba Ensemble has performed under Morris' direction on Bourbon Street and at the New Orleans Jazz Festival, Disney World, the National MENC Conference in Kansas City, the International T.U.B.A. Conference in Austin, Texas, the Kennedy Center in Washington, D.C., and at the Spoleto Festival in Charleston, South Carolina. The ensemble has also performed in Carnegie Hall 7 times, produced 22 commercial recordings—some which have been grammy nominated—and generated more than 600 compositions for the tuba, euphonium and tuba ensemble. Morris put together the first euphonium choir and organized the first recording project for euphonium choir.

Morris created and conducted Symphonia, a tuba/euphonium ensemble that was composed of top professional tuba and euphonium players from across the United States. A reunion concert billed as ''Tubas of Mass Destruction'' was held in 2007 at Tennessee Tech University, and included over 100 current and former students from his then-40 years of teaching. Throughout his teaching career, Morris has encouraged his students to arrange and compose pieces of music for the ensemble, which was necessary in the early days of the group, as there was virtually no repertoire for them to play. Provided by Wikipedia 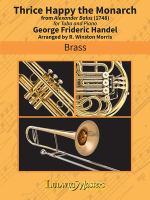