Peter McLaren (born 1948) is a Canadian scholar who serves as Distinguished Professor in Critical Studies, College of Educational Studies, Chapman University, where he is Co-Director of the Paulo Freire Democratic Project and International Ambassador for Global Ethics and Social Justice. He is also Emeritus Professor of Urban Education, University of California, Los Angeles, and Emeritus Professor of Educational Leadership, Miami University of Ohio. He is also Honorary Director of Center for Critical Studies in Education in Northeast Normal University, Changchun, China.

McLaren is the author and editor of over forty-five books and hundreds of scholarly articles and chapters. His writings have been translated into over 20 languages. He is married to Yan Wang from Northeast China. They currently live in Orange, California. He has a son and daughter from previous marriages.

McLaren is known as one of the leading architects of critical pedagogy and for his scholarly writings on critical literacy, the sociology of education, cultural studies, critical ethnography, and Marxist theory. Paulo Freire, a founding figure of critical pedagogy, stated: "Peter McLaren is one among the many outstanding 'intellectual relatives' I 'discovered' and by whom I in turn was 'discovered.' I read Peter McLaren long before I ever came to know him personally. ... Once I finished reading the first texts by McLaren that were made available to me, I was almost certain that we belonged to an identical 'intellectual family.'"

During a keynote address at Chapman University on October 25, 2014, Nita Freire, eminent educational scholar and widow of Paulo Freire remarked: "It is ... a huge thrill for me to see Peter McLaren and Donaldo Macedo, who ever since through discussions and dialogue became old friends of work and friendship, partners of ideological and theoretical ideas of Paulo. They along with Henry Giroux formulated the critical pedagogy as we know of today."

McLaren has developed a reputation for his uncompromising political analysis influenced by a Marxist humanist philosophy and a unique literary style of expression. He has worked with Abahlali baseMjondolo, in South Africa; the landless workers' movement, Movimento dos Trabalhadores Rurais Sem Terra – MST, in Brasil, the Zapatistas in Mexico, and members of the Bolivarian revolution in Venezuela.; and with the left education workers union in Turkey where in the midst of a demonstration he was teargassed and hurled to the ground by a police's riot shield.

McLaren is a faculty member at the Institute of Critical Pedagogy at The Global Center for Advanced Studies and he lectures worldwide on the politics of education. In Finland he gave an Opening Lecture in Paulo Freire Center–Finland in November 20, 2007. La Escuela Normal Superior de Neiva in Colombia has named one of its buildings after Peter McLaren. Provided by Wikipedia 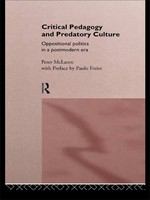 Critical literacy politics, praxis, and the postmodern / edited by Colin Lankshear and Peter L. McLaren ; with a foreword by Maxine Greene.
Published 1993
Other Authors: '; “...McLaren, Peter, 1948-...”

Critical literacy : politics, praxis, and the postmodern / edited by Colin Lankshear and Peter L. McLaren ; with a foreword by Maxine Greene.
Published 1993
Other Authors: '; “...McLaren, Peter, 1948-...”

Critical literacy : politics, praxis, and the postmodern / edited by Colin Lankshear and Peter L. McLaren ; with a foreword by Maxine Greene.
Published 1993
Other Authors: '; “...McLaren, Peter, 1948-...”