Peter Ludlow (; born January 16, 1957), who also writes under the pseudonym Urizenus Sklar, is an American philosopher of language. He is noted for interdisciplinary work on the interface of linguistics and philosophy—in particular on the philosophical foundations of Noam Chomsky's theory of generative linguistics and on the foundations of the theory of meaning in linguistic semantics. He has worked on the application of analytic philosophy of language to topics in epistemology, metaphysics, and logic, among other areas.

Ludlow has also established a research program outside of philosophy and linguistics. Here, his research areas include conceptual issues in cyberspace, particularly questions about cyber-rights and the emergence of laws and governance structures in and for virtual communities, including online games, and as such he is also noted for influential contributions to legal informatics. In recent years Ludlow has written nonacademic essays on hacktivist culture and related phenomena such as WikiLeaks.

Ludlow has taught as a professor of philosophy at the State University of New York at Stony Brook, the University of Michigan, the University of Toronto and Northwestern University, where he was the John Evans Professor in Moral and Intellectual Philosophy. In May 2015, Ludlow resigned his position at Northwestern after a university disciplinary body found that "he had engaged in sexual harassment involving two students." Provided by Wikipedia 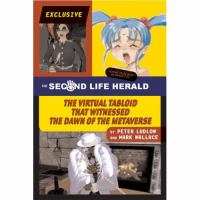 The Second Life Herald : the virtual tabloid that witnessed the dawn of the metaverse /
by Ludlow, Peter, 1957-
Published 2007
Call Number: Loading...
Located: Loading...
Book Loading...
Add to Book Bag Remove from Book Bag
Save to List