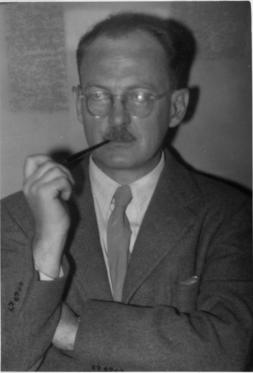 Owen Lattimore (July 29, 1900 – May 31, 1989) was an American author, educator, and influential scholar of China and Central Asia, especially Mongolia. Although he never earned a college degree, in the 1930s he was editor of ''Pacific Affairs'', a journal published by the Institute of Pacific Relations, and then taught at Johns Hopkins University in Baltimore, Maryland, from 1938 to 1963. During World War II, he was an advisor to Chiang Kai-shek and the American government and contributed extensively to the public debate on American policy in Asia. From 1963 to 1970, Lattimore was the first Professor of Chinese Studies at the University of Leeds in England.

In the early post-war period of McCarthyism and the Red Scare, American wartime "China Hands" were accused of being agents of the Soviet Union or under the influence of Marxism. In 1950, Senator Joseph McCarthy accused Lattimore in particular of being "the top Russian espionage agent in the United States." The accusations led to years of Congressional hearings that did not substantiate the charge that Lattimore had been a spy, and Soviet Venona cables decoded during WWII and declassified decades later, have not yet referred to Lattimore as one of the Soviet agents active in the US. The hearings did document Lattimore's sympathetic statements about Stalin and the Soviet Union, however. Although charges of perjury were dismissed, the controversy put an end to Lattimore's role as a consultant of the U.S. State Department and eventually to his career in American academic life. He died in 1989 in Providence, Rhode Island, having resided in his later years in Pawtucket.

Lattimore's "lifetime intellectual project", notes one recent scholar, was to "develop a 'scientific' model of the way human societies form, evolve, grow, decline, mutate and interact with one another along 'frontiers'." He eclectically absorbed and often abandoned influential theories of his day that dealt with the great themes of history. These included the ecological determinism of Ellsworth Huntington; biological racism, though only to the extent of seeing characteristics which grew out of ecology; the economic geography and location theory; and some aspects of Marxist modes of production and stages of history, especially through the influence of Karl August Wittfogel. The most important and lasting influence, however, was Arnold J. Toynbee and his treatment of the great civilizations as organic wholes which were born, matured, grew old, and died. Lattimore's most influential book, ''The Inner Asian Frontiers of China'' (1940), used these theories to explain the history of East Asia not as the history of China and its influence on its neighbors, but as the interaction between two types of civilizations, settled farming and pastoral, each of which had its role in changing the other. Provided by Wikipedia

Pivot of Asia; Sinkiang and the inner Asian frontiers of China and Russia, by Owen Lattimore with the assistance of Chang Chih-yi [and others.
by Lattimore, Owen, 1900-1989.
Published 1950
Call Number: Loading...
Located: Loading...
Book Loading...