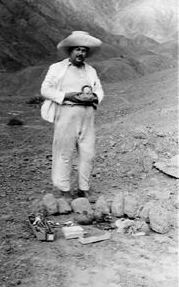 Rafael Larco Hoyle (18 May 1901 in Chicama Valley, Peru – 23 October 1966, Lima), raised at Chiclin, his family's estate, was sent to school in Maryland, United States, at the age of twelve. He later entered Cornell University to study agricultural engineering and by 1923 returned to Peru to work on the family's sugar cane plantation. After spending most of his youth abroad, Larco Hoyle arrived to Peru with the eyes of an outsider. With this foreigner's curiosity he explored the country and discovered an ancient cultural patrimony in the north coast. Larco Hoyle recognized the need to house these objects in a safe place. It was at that point, Larco Hoyle dreamt of a museum, one like he had seen in the United States.

During that same year, Larco Hoyle received some advice from his uncle, Victor Larco Herrera, a founder of the first museum in Lima. He urged Larco Hoyle to form a new museum in Lima, one that could guard all the archaeological relics that were continually being extracted by clandestine excavators.

Larco Hoyle agreed with his uncle. He yearned to erect a living monument in honor of his father whom he admired so much for his patriotism and love for Peru. He got to work creating a museum that would carry on his father's legacy. Larco Hoyle purchased two large collections: 8000 pieces from Roa and 6000 pieces from Carranza. He also purchased several small collections in Chicama Valley, Trujillo, Virú, and Chimbote. Within a year, the collection had grown significantly and display cases were installed in a small house on the Chiclín estate. On July 28, 1926, Independence Day, the Rafael Larco Herrera Museum opened its doors to the public.

With the museum up and running and a collection of approximately 30,000 pieces, Larco Hoyle began classifying the collection. Peruvian archaeology was in its infancy and Larco Hoyle realized many typologies were yet to be recognized. He set out to correct that and approached archaeological research academically. During the 1930s, he discovered many distinct Peruvian cultures such as Viru, Salinar, Cupisnique, and Lambayeque. The focus of his research became the Mochica culture. In 1946, Larco Hoyle, director of the Larco Museum, developed the first Peruvian chronology of ancient cultures, one that has remained current. Provided by Wikipedia