Lancaster was an associate vice president for a technology company prior to being laid off after 9/11. Being laid off, and her adaptation to being unemployed, became the subject matter for her blog and, later, her books.

Lancaster was raised in Indiana and now resides in Chicago, Illinois with her husband, Fletch, and their many pets. She is an alumna of Purdue University. She is known for her humor and rampant narcissism which is mentioned in her books. Provided by Wikipedia

My fair lazy : one reality television addict's attempt to discover if not being a dumb ass is the new black, or a culture-up manifesto / Jen Lancaster.
by Lancaster, Jen, 1967-
Published 2010
Call Number: Loading...
Located: Loading...
Book Loading... 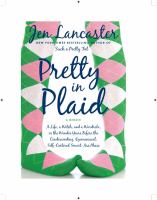 The tao of Martha : my year of LIVING, or why I'm never getting all that glitter off of the dog / Jen Lancaster.
by Lancaster, Jen, 1967-
Published 2013
Call Number: Loading...
Located: Loading...
Book Loading...