is a Japanese Buddhist philosopher, educator, author, and nuclear disarmament advocate. He served as the third president and then honorary president of the Soka Gakkai, the largest of Japan's new religious movements. Ikeda is the founding president of the Soka Gakkai International (SGI), the world's largest Buddhist lay organization, which claims to have approximately 12 million practitioners in 192 countries and territories, more than 1.5 million of whom reside outside of Japan as of 2012.

Ikeda was born in Tokyo, Japan, in 1928, to a family of seaweed farmers. He survived the devastation of World War II as a teenager, which he said left an indelible mark on his life and fueled his quest to solve the fundamental causes of human conflict. At age 19, Ikeda began practicing Nichiren Buddhism and joined a youth group of the Soka Gakkai, which led to his lifelong work developing the global peace movement of SGI and founding dozens of institutions dedicated to fostering peace, culture and education. His accomplishments are honored internationally; in Japan he has been described as a "controversial figure" over several decades through the 1990s in relation to the political party Kōmeitō, which he founded, and has been the subject of libelous accusations in Japanese media.

In the 1960s, Ikeda worked to reopen Japan's national relations with China and also to establish the Soka education network of schools from kindergartens through university levels, while beginning to write what would become his multi-volume historical novel, ''The Human Revolution'', about the Soka Gakkai's development during his mentor Josei Toda's tenure. In 1975, he established the Soka Gakkai International, and throughout the 1970s initiated a series of citizen diplomacy efforts through international educational and cultural exchanges for peace. Since the 1980s, in his annual peace proposals marking the anniversary of the SGI's founding, he has increasingly called for nuclear disarmament. Ikeda's vision for the SGI was described in 2010 by Olivier Urbain, then director of the Toda Peace Institute founded by Ikeda, as a "borderless Buddhist humanism that emphasizes free thinking and personal development based on respect for all life."

By 2015, Ikeda had published more than 50 dialogues with scholars, peace activists and leading world figures. In his role as SGI president, Ikeda has visited 55 nations and spoken on subjects including peace, environmentalism, economics, women's rights, interfaith dialogue and Buddhism and science. Provided by Wikipedia 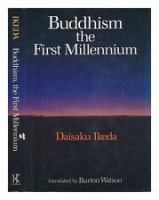