Samuel Hollander is one of the most influential and controversial living authors on History of Economic Thought, especially on classical economics. His monumental studies of Adam Smith, David Ricardo, Thomas Malthus and John Stuart Mill have provoked some sharp reactions. Especially his "new view" of David Ricardo as a direct predecessor of later neo-classical economists such as Marshall and Walras has triggered heated debates. Apart from many critics he has also enjoyed the support of a considerable number of prominent fellow economists. His work was highly recommended by the late Lord Robbins, who says "... he really surpasses all previous historians of economic thought, especially on Ricardo" (Robbins, 1998, p. 143). Provided by Wikipedia 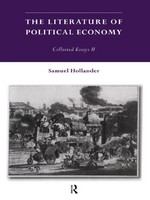