Ira Gershwin (born Israel Gershowitz, December 6, 1896 – August 17, 1983) was an American lyricist who collaborated with his younger brother, composer George Gershwin, to create some of the most memorable songs in the English language of the 20th century.

With George he wrote more than a dozen Broadway shows, featuring songs such as "I Got Rhythm", "Embraceable You", "The Man I Love" and "Someone to Watch Over Me". He was also responsible, along with DuBose Heyward, for the libretto to George's opera ''Porgy and Bess''.

The success the Gershwin brothers had with their collaborative works has often overshadowed the creative role that Ira played. His mastery of songwriting continued, however, after the early death of George. He wrote additional hit songs with composers Jerome Kern, Kurt Weill, Harry Warren and Harold Arlen.

His critically acclaimed 1959 book ''Lyrics on Several Occasions'', an amalgam of autobiography and annotated anthology, is an important source for studying the art of the lyricist in the golden age of American popular song. Provided by Wikipedia 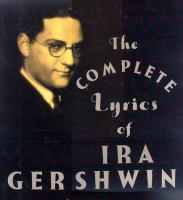