Marie Hall Ets (December 16, 1895 in Milwaukee, Wisconsin – January 17, 1984 in Inverness, Florida) was an American writer and illustrator who is best known for children's picture books. She attended Lawrence College, and in 1918, Ets journeyed to Chicago where she became a social worker at the Chicago Commons, a settlement house on the northwest side of the city. There she met Ines Cassettari, an immigrant from Italy who worked at the settlement. Ets transcribed Cassettari's autobiography, and the book was later published as ''Rosa: The Life of an Italian Immigrant''.

In 1960 Ets won the annual Caldecott Medal for her illustrations of ''Nine Days to Christmas'', whose text she wrote with Aurora Labastida. She died in 1984. ''Just Me'' and ''In the Forest'' are both Caldecott Honor books. The black-and-white charcoal illustrations in ''Just Me'' "almost take on the appearance of woodcuts" and are similar in style to the illustrations in ''In the Forest''. Constantine Georgiou comments in ''Children and Their Literature'' that Ets' "picture stories and easy-to-read books" (along with those of Maurice Sendak) "are filled with endearing and quaint human touches, putting them at precisely the right angle to life in early childhood." ''Play With Me'', says Georgiou, is "a tender little tale, delicately illustrated in fragile pastels that echo the quiet mood of the story." Provided by Wikipedia 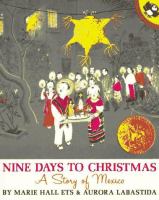