Jenny Diski FRSL (née Simmonds; 8 July 1947 – 28 April 2016) was an English writer. She had a troubled childhood, but was taken in and mentored by the novelist Doris Lessing; she lived in Lessing's house for four years. Diski was educated at University College London, and worked as a teacher during the 1970s and early 1980s.

Diski was a regular contributor to the ''London Review of Books''; the collections ''Don't'' and ''A View from the Bed'' include articles and essays written for the publication. She won the 2003 Thomas Cook Travel Book Award for ''Stranger on a Train: Daydreaming and Smoking around America With Interruptions''. Provided by Wikipedia 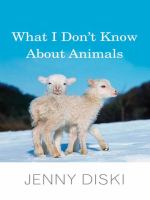