Beatrice Schenk de Regniers was born in Lafayette, Indiana, and studied social work administration at the University of Chicago, earning her M.Ed. in 1941. During the 1940s she worked in the US and in a Yugoslav refugee camp on the Sinai peninsula.

During the 1950s she was a free-lance writer of nonfiction, humor, short stories, and columns, as well as children's books. Her first book was ''The Giant Story'', a picture book illustrated by Maurice Sendak, published by Harper in 1953.

From 1961 she worked at Scholastic, Inc. as the founding editor of its "Lucky Book Club", four days weekly with Monday reserved for her own writing. She retired twenty years later.

She wrote over fifty books, ten of which were published under the pseudonym of Tamara Kitt, including ''The Adventures of Silly Billy'' (1961), and ''The Boy Who Fooled the Giant'' (1963).

Illustrator Beni Montresor won the annual Caldecott Medal for ''May I Bring a Friend?'', published by Atheneum Books in 1964. Provided by Wikipedia 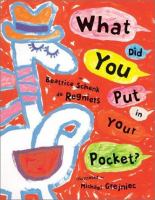 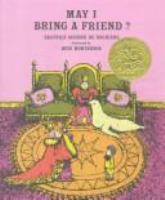 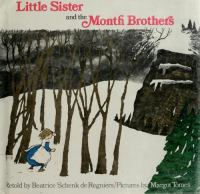