Simon Critchley (born 27 February 1960) is an English philosopher and the Hans Jonas Professor of Philosophy at the New School for Social Research.

Challenging the ancient tradition that philosophy begins in wonder, Critchley argues that philosophy begins in disappointment. Two particular forms of disappointment inform Critchley's work: religious and political disappointment. While religious disappointment arises from a lack of faith and generates the problem of what is the meaning of life in the face of nihilism, political disappointment comes from the violent world we live in and raises the question of justice in a violently unjust world. In addition, to these two regions of research, Critchley's recent works have engaged in more experimental forms of writing on Shakespeare, Bowie, suicide, Greek tragedy and association football. Provided by Wikipedia 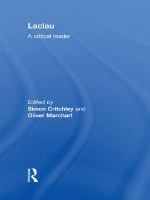