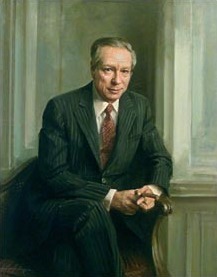 Werner Michael Blumenthal (born January 3, 1926) is a German-born American business leader, economist and political adviser who served as United States Secretary of the Treasury under President Jimmy Carter from 1977 to 1979.

At age thirteen, Blumenthal barely escaped Nazi Germany with his Jewish family in 1939, and was forced to spend World War II living in the ghetto of Japanese-occupied Shanghai, China, until 1947. He then made his way to San Francisco and began doing odd jobs to work his way through school. He enrolled in college, eventually graduating from U.C. Berkeley and Princeton University with degrees in international economics. During his career, he became active in both business and public service.

Before being appointed to a cabinet position with newly elected President Jimmy Carter, Blumenthal had become a successful business leader and had already held administrative positions under Presidents John F. Kennedy and Lyndon Johnson. As a member of the Carter administration, he helped guide economic policy and took part in reestablishing ties with China. After he resigned, he became chairman and CEO of Burroughs Corporation and Unisys, followed by seventeen years as director of the restored Jewish Museum in Berlin. He is the author of ''The Invisible Wall'' (1998, Counterpoint Press) and ''From Exile to Washington: A Memoir of Leadership in the Twentieth Century'' (2013, The Overlook Press). Provided by Wikipedia