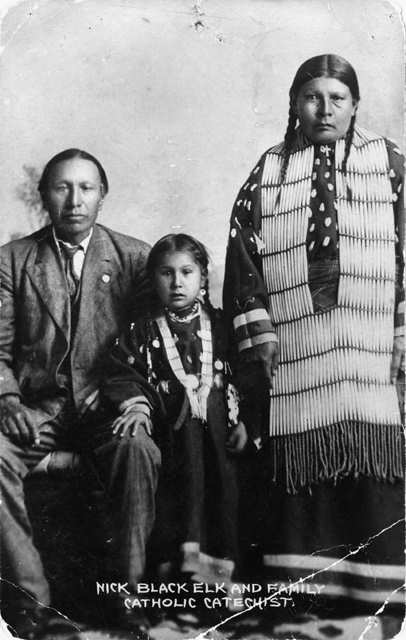 Heȟáka Sápa, commonly known as Black Elk (December 1, 1863 – August 19, 1950), was a ''wičháša wakȟáŋ'' ("medicine man, holy man") and ''heyoka'' of the Oglala Lakota people. He was a second cousin of the war leader Crazy Horse and fought with him in the Battle of Little Bighorn. He survived the Wounded Knee Massacre in 1890. He toured and performed in Europe as part of Buffalo Bill's Wild West.

Black Elk is best known for his interviews with poet John Neihardt, where he discussed his religious views, visions, and events from his life. Neihardt published these in his book ''Black Elk Speaks'' in 1932. This book has since been published in numerous editions, most recently in 2008. Near the end of his life, he also spoke to American ethnologist Joseph Epes Brown for his 1947 book ''The Sacred Pipe''. There has been great interest in these works among diverse people interested in Native American religions, notably those in the pan-Indian movement.

Black Elk converted to Catholicism, becoming a catechist, but he also continued to practice Lakota ceremonies. The Roman Catholic Diocese of Rapid City opened an official cause for his beatification within the Roman Catholic Church in 2016. His grandson, George Looks Twice said, "He was comfortable praying with this pipe and his rosary, and participated in Mass and Lakota ceremonies on a regular basis". Provided by Wikipedia