Ben Shalom Bernanke ( ; born December 13, 1953) is an American economist. He is a distinguished fellow at the Brookings Institution who served two terms as the 14th Chair of the Federal Reserve, from 2006 to 2014. During his tenure as chair, Bernanke oversaw the Federal Reserve's response to the late-2000s financial crisis, for which he was named the 2009 ''Time'' Person of the Year. Before becoming Federal Reserve chair, Bernanke was a tenured professor at Princeton University and chaired the department of economics there from 1996 to September 2002, when he went on public service leave.

From August 5, 2002, until June 21, 2005, he was a member of the Board of Governors of the Federal Reserve System, proposed the Bernanke doctrine, and first discussed "the Great Moderation" — the theory that traditional business cycles have declined in volatility in recent decades through structural changes that have occurred in the international economy, particularly increases in the economic stability of developing nations, diminishing the influence of macroeconomic (monetary and fiscal) policy.

Bernanke then served as chairman of President George W. Bush's Council of Economic Advisers before President Bush nominated him to succeed Alan Greenspan as chairman of the United States Federal Reserve. His first term began February 1, 2006. Bernanke was confirmed for a second term as chairman on January 28, 2010, after being renominated by President Barack Obama, who later referred to him as "the epitome of calm." His second term ended January 31, 2014, when he was succeeded by Janet Yellen on February 3, 2014.

Bernanke wrote about his time as chairman of the Federal Reserve in his 2015 book, ''The Courage to Act'', in which he revealed that the world's economy came close to collapse in 2007 and 2008. Bernanke asserts that it was only the novel efforts of the Fed (cooperating with other agencies and agencies of foreign governments) that prevented an economic catastrophe greater than the Great Depression. Provided by Wikipedia

The courage to act : a memoir of a crisis and its aftermath /
by Bernanke, Ben
Published 2015
Call Number: Loading...
Located: Loading...
Book Loading...
Add to Book Bag Remove from Book Bag
Save to List 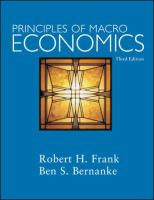