Scott Berkun is an American author and speaker.

Berkun studied computer science, philosophy, and design at Carnegie Mellon University. He worked at Microsoft from 1994 to 2003 on Internet Explorer 1.0 to 5.0, Windows, MSN, and in roles including usability engineer, lead program manager, and UI design evangelist. He left Microsoft in 2003 with the goal of filling his bookshelf with books he has written.

He has written three best-selling books: ''Making things happen'', ''The Myths of Innovation'', and ''Confessions of a Public Speaker''.

He taught creative thinking at the University of Washington, led an NYC architecture tour at the GEL conference, and his work has been featured in the ''New York Times'', ''Washington Post'', and on National Public Radio. Berkun makes a living speaking at events and teaching seminars around the world on topics including leading teams, managing projects, and creative thinking.

In 2008 he received the Jolt Award for Productivity Winner for his book ''The Myths of Innovation''. Provided by Wikipedia

The Year Without Pants: WordPress.com and the Future of Work
by Berkun, Scott
Published 2013
Call Number: Loading...
Located: Loading...
CONNECT 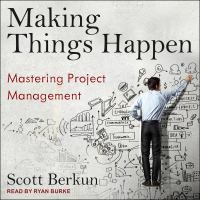