Florence Hasseltine Atwater (née Carroll; September 13, 1896 – August 23, 1979) was born in Chicago, the last child of Mary Josephine ("Minnie") Delany, a former concert pianist with the Philadelphia Conservatory, and James Carroll, a Philadelphia publisher. As Florence Carroll, she obtained her AB and MA in French literature at the University of Chicago (1920) where she was co-editor of The Chicago Literary Monthly, and student of Richard Atwater. They married in 1921 and had two children, Doris (1922–2000) and Carroll (1925–2013).

After her husband's stroke in 1934, Florence Atwater started teaching high school French, English and Latin, and wrote short pieces for ''The New Yorker'', ''Woman's Home Companion'' and ''The Atlantic''. She submitted her husband's original version of ''Mr. Popper's Penguins'' to two different publishers but it met with no success. She rewrote parts of the book and the revised version was accepted by Little Brown and published in 1938 to great success. ''Mr. Popper's Penguins'' won the Newbery Honor Award in 1939 and the Lewis Carroll Shelf Award in 1958. It has been translated into many languages, and has never been out of print. In the summer of 2011, a movie of the same name was released. Provided by Wikipedia 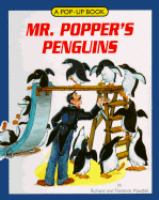 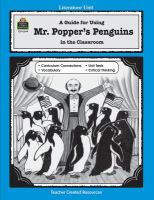