Dmitri Dmitriyevich Shostakovich, |group=n}} (9 August 1975) was a Soviet-era Russian composer and pianist who became internationally known after the premiere of his First Symphony in 1926 and was regarded throughout his life as a major composer.

Shostakovich achieved early fame in the Soviet Union, but had a complex relationship with its government. His 1934 opera ''Lady Macbeth of Mtsensk'' was initially a success, but eventually was condemned by the Soviet government, putting his career at risk. In 1948 his work was denounced under the Zhdanov Doctrine, with professional consequences lasting several years. Even after his censure was rescinded in 1956, performances of his music were occasionally subject to state interventions, as with his Thirteenth Symphony (1962). Shostakovich was a member of the Supreme Soviet of the RSFSR (1947) and the Supreme Soviet of the Soviet Union (from 1962 until his death), as well as chairman of the RSFSR Union of Composers (1960–1968). Over the course of his career, he earned several important awards, including the Order of Lenin, from the Soviet government.

Shostakovich combined a variety of different musical techniques in his works. His music is characterized by sharp contrasts, elements of the grotesque, and ambivalent tonality; he was also heavily influenced by neoclassicism and by the late Romanticism of Gustav Mahler. His orchestral works include 15 symphonies and six concerti (two each for piano, violin, and cello). His chamber works include 15 string quartets, a piano quintet, and two piano trios. His solo piano works include two sonatas, an early set of 24 preludes, and a later set of 24 preludes and fugues. Stage works include three completed operas and three ballets. Shostakovich also wrote several song cycles, and a substantial quantity of music for theatre and film.

Shostakovich's reputation has continued to grow after his death. Scholarly interest has increased significantly since the late 20th century, including considerable debate about the relationship between his music and his attitudes to the Soviet government. Provided by Wikipedia 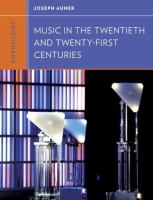 Anthology for Music in the twentieth and twenty-first centuries /
Published 2013
Other Authors: “...Shostakovich, Dmitriĭ Dmitrievich, 1906-1975....” 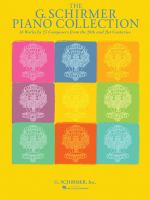 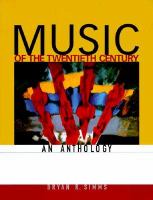