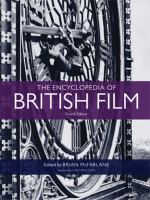 This is a comprehensive history of the British film industry from its inception to the present day, with minute listings of the producers, directors, actors and studios behind a century of great British cinema.